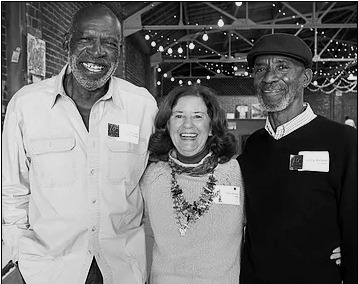 Joel Clark, Tisha Kenny and Lawrence Williams met at Antioch University West San Francisco, where Joel was Regional Director of the University, Tisha was Director of the Health Administration Master’s Program and Founder/Coordinator of the undergraduate Holistic Health Program, and Larry was a student pursuing his Master’s degree in Health Administration. Together, they provided a blend of education, health care skills and knowledge, and focused on creating and strengthening community-based programs and organizations. They understood that larger issues, such as racism, violence, and substance abuse, were critical public health (and not just personal health) problems. All three saw there was a need to support community-driven programs, with the belief in the power of the community to heal itself from these wounds. In 1984 The Health & Human Resource Education Center was founded on this belief.

For the first few years, a curriculum was developed and marketed to Bay Area community-based organizations to develop/enhance the skills of their employees to more effectively provide their services. Many of these organizations had grown out of the commitment of individuals to their communities, and those individuals and their staff needed training as their ideas then grew into organizations. Due to unexpected personal circumstances, including Tisha’s third bout of breast cancer, HHREC went on temporary hold. While Joel and Larry were deep in their community work, Larry kept the non-profit incorporation papers up to date, and in 1989, after nearly being crushed under the collapse of the Cypress Freeway during the Loma Prieta earthquake, Tisha stepped forward with her ground-breaking prevention program Health Through Art and re-activated HHREC.

This re-activation included re-assembling the founding Board of Directors: Leroy Looper, Grace Ricco- Pena and Arnold Perkins to continue guiding the agency along with Joel Clark and Larry Williams. Tisha became the agency’s first Executive Director.

Since then HHREC has been home to dozens of projects, engaged tens of thousands of local East Bay residents, and been a beacon for the community-voice, creativity, and wellness in Alameda County.